One of of Nodaway County's Unmarried Sheriffs 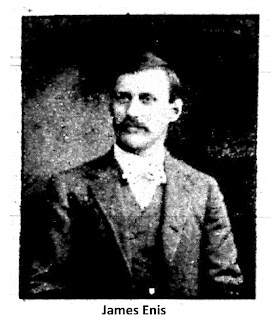 Sheriff Enis was one of at least three unmarried men elected to the office. He married Margaret Graham of Clyde, Missouri in 1906. [Update: Some research today, Dec 7, indicates that one other sheriff was also unmarried, at least during his first term.]

During his terms of office, his father, Francis A. Enis, of Clyde, and one of his five sisters, Miss Belle Enis, resided at the jail with him and helped in the duties of caring for and feeding the prisoners.

After successfully completing his second term of office, Mr. Enis went into business, opening a general store and operating it successfully until his death, at the age of 49, from complications following surgery at St. Joseph hospital.

Sheriff Enis would later be appointed at a steward for the State Hospital No. 2 at St. Joseph by Governor Hyde. He would, however, withdraw from the appointment, citing his duty to care for his mother-in-law, who was ninety years of age and who lived with him and his wife. He did not want to disrupt her "beautiful" home life.
By Susan Cronk - December 06, 2017