I am saddened today to learn of the passing of Richard Stratton (Margaret Stratton​), known by many as "Sarge." Richard dedicated his life to law enforcement, first as a Missouri State Highway Patrolman and later as the sheriff of Harrison County, Missouri.

He and his wife, Margaret, were longtime family friends and his presence will be missed. Heartfelt condolences are offered to his wife and children. 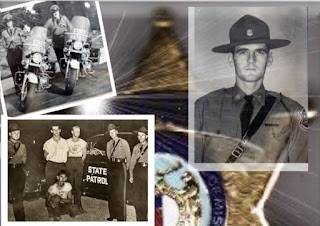 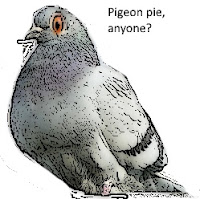 The city of Maryville had a problem on its hands in late 1930, in the form of pigeons. Hoards of them. They seemed to be everywhere. Doing what pigeons do do. The sheriff caught the attention of the local newspaper, the Maryville Daily Forum.

“The sheriff put on his hunting outfit, took his trusty rifle in his hand and went forth to rid the business district of the pigeon pest. This morning there were no pigeons to be seen and it looks as though the sheriff 'did his duty.'"

"After shooting one or two off of the courthouse, the sheriff went down to the Methodist church on Main Street and proceeded to kill off a few pigeons there. He then went to the South Methodist church on Buchanan Street and knocked some more down. He then traveled on north to the Christian Church where a few more casualties occurred. One that the sheriff told the morning was pretty hard to believe. Listen and see for yourself. Mr. England saw a pigeon sitting on a wire near the courthouse tower. There was another close up against the tower. The sheriff sighted his gun at the pigeon on the wire, pulled the trigger, and the pigeon close to the tower fell to the ground while the other escaped. The sheriff also tells of another instance when he shot a pigeon. The bird fell right in front of a man going down the street. The man promptly picked the pigeon up, shoved it under his coat, and said, “Here’s one he’s not going to get,” and sallied on down the street. So, with the Methodist pigeons, the South Methodist pigeons and the Christian pigeons, inmates in the jail will partake of some “wild game.”

I'm not sure what pigeon pie tastes like, and personally I don't want to find out.

"Sheriff Harve England is an excellent marksman; therefore, the prisoners at the county jail are benefiting by eating pigeon pie today."

"The sheriff says that he shot forty-three pigeons yesterday, but could only get thirty-some-odd of them. 'The rest fell in places he could not reach.'"


NOTE: Two years later Earl Gravens, a prisoner in the jail, absconded with Sheriff England's favorite hunting jacket during Gravens' escape. I wonder if he did it because it was cold out or maybe he was trying to spare his fellow inmates from any more pigeon pie?"
By Susan Cronk - September 22, 2018 No comments:

Many think of sheriff's posses being a thing straight out of the old west, but law officers were still on horseback into the early 1900s. However, posses were used only rarely, and typically when in pursuit of someone suspected of a serious crime, such as murder, rape, assault, robbery, etc.

This posse, formed in the late 1950s was in part for show, but it served a real purpose too. Shortly after this posse was formed, under Sheriff James Tucker, in Nodaway County, and overseen by his chief deputy, W.R. Jackson, the posse was helpful in locating a young boy who had gone missing. Unfortunately, the boy, who had gone to a nearby river to fish, had fallen into the river and drowned.

Still, these posse members, on horseback, greatly multiplied the number of people able to search for the boy and they were able to cover a greater distance more quickly. Additionally, their participation in community events helped strengthen and maintain their connection to the entire Nodaway County community.

The 'posse' was later replaced by reserve officers who, for the whopping sum of $1.00 per year + expenses (during Sheriff John Middleton's term), patrolled outlying rural towns to help the understaffed sheriff's office respond to non-violent incidents, take reports, and keep 'hooligans' in check.  They provided their own cars, their own uniforms, and their own meals. It was a community service they were happy to provide. With 738 square miles of county and only the sheriff and one or two deputies available to cover 24 hours a day 7 days a week, those posse men or reserves were a valuable asset.

Before there were hand-held radio units, the Nodaway County sheriff's office used colored flags to summon one another to the sheriff's office. In January 1938, Deputy Sheriff Fred Newlon devised a plan whereby colored flags could be hung on a socket outside the window of the sheriff's office at the courthouse to alert Sheriff Roy Sellers (Blue), Deputy Ed Wallace (Green), Maryville City Police (White), the Missouri Highway Patrol (Red), and Prosecutor Rathbun (Orange) that their presence was needed at the office.
By Susan Cronk - September 06, 2018 No comments: